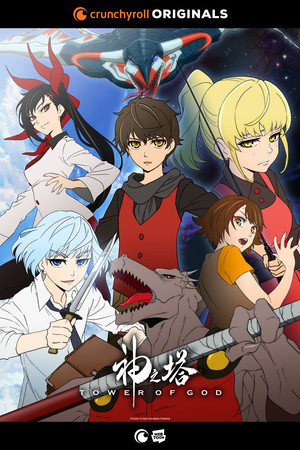 The series will debut on Crunchyroll on April 1. The anime will premiere in Japan on the same day at 24:30 JST (effectively April 2 at 12:30 a.m.). The website teased the anime would also have a simultaneous release South Korea.

Takashi Sano (Sengoku Basara: End of Judgement, Transformers: Energon) is directing the anime at Telecom Animation Film (Lupin the Third: Part 5, We Rent Tsukumogami, Orange). Hirokazu Hanai (Dances with the Dragons, Chain Chronicle: The Light of Haecceitas) is the assistant director. Erika Yoshida (Trickster, Namu Amida Butsu! -Rendai Utena-) is in charge of series composition. Masashi Kudo (Bleach, Hayate the Combat Butler) and Miho Tanino are designing the characters. Kevin Penkin (Made in Abyss, The Rising of The Shield Hero) is composing the music.

The upcoming Crunchyroll Original series centers on the journey of a young man as he battles his way through the mysterious Tower, building friendships, discovering the rules that govern this tower, and facing unimaginable terrors, as he strives to find the only friend he’s ever known.