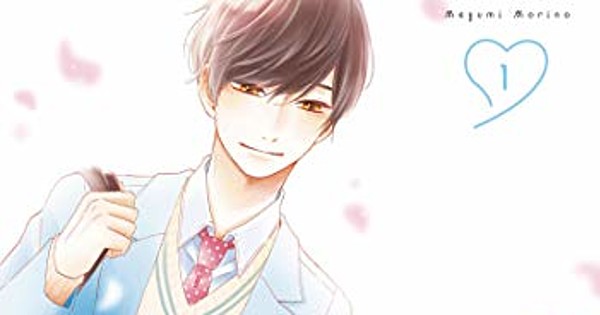 Romance for teens has had a problem for a long time, probably since even before Cathy and Heathcliff began their tumultuous romance back in 1847. (Not that Wuthering Heights was YA, strictly speaking, but it’s been embraced by that reading community.) What is that problem? The romanticisation of unhealthy, even dangerous, relationships. Found a bad boy? Love can fix him! Does he have a weird, almost creepy fascination with your whereabouts at all times? That just means he loves you! While these tropes have been on the way out in romance for older audiences, young adult fiction just can’t seem to shake them, and while A Condition Called Love‘s first volume doesn’t have anything horrifically dangerous, it certainly feels more like a story where you want to warn the heroine to run away than root for the love interest.

That heroine is Hotaru, a sixteen-year-old high school first year. She’s got a good family life, close friends, and is generally happy with how things are. As she’s gotten older, she’s noticed that her friends are starting to obsess about finding romantic love, but she herself doesn’t feel that pull, nor does she feel particularly threatened by her friends acquiring boyfriends – in fact, she almost reacts as if they got a new pet or something and she’s not really an animal person. It has, however, begun to make her friends feel awkward, and while they never go so far as to ask if something’s wrong with Hotaru, there is a slight feeling that they’re wondering. This in turn begins to make Hotaru wonder a little bit about herself, but nothing drives that like her meeting with Hananoi.

Hananoi is one of the most desirable boys at school in terms of looks, so when he presents himself at Hotaru’s classroom one morning to ask her out, everyone is in something of a tizzy. The reason for his interest? Hotaru and her friend witnessed his fairly dramatic breakup at the restaurant they were eating in and then later Hotaru saw him slumped on a bench in the snow and was nice to him. The straight-forward way she treated him and her kindness went straight to Hananoi’s heart, and now he desperately wants Hotaru for his own. I say “for his own” instead of “as his girlfriend” advisedly. Hananoi seems not so much in love as obsessed with Hotaru – when she says she thinks short hair is easy (assuming he was talking about her own hair), he cuts his off; when he assumes she won’t like his pierced ears, he quickly removes his earrings. When she says her little sister has a figure skating recital on Christmas, he finds the exact rink so he can take Hotaru on a date. Separately, all of these things would be at least okay, if not a little extreme in a couple of cases. Together, coupled with his New Year’s wish being “I want to make you mine,” they become warning bells. If this wasn’t so textbook in so many other ways, I’d almost think that sometime in volume two Hananoi would lock her in a cage á la Amnesia.

Why is all of this so unfortunate to find in a romance manga aimed at a younger readership? Largely because it feels like Hananoi is taking advantage of Hotaru’s professed innocence and marginal interest and using those things to manipulate her emotionally. When Hotaru is thinking of ending their trial dating period and asking if they can still be friends, Hananoi tells her that if she stops dating him, she’ll never see him again. As with most of the other examples, taken separately, it’s fine – why would he want to hang out with the girl who dumped him? But when we combine it with all of the other story elements, it smacks of him attempting to keep her with him by any means necessary, especially since Hotaru has been very clear with him that she’s not sure if this “love” thing is even something she wants.

It’s a shame that this has so many off-putting aspects, because Hotaru herself is a great heroine. She’s smart, down-to-earth, and very secure in who she is, and she’s clearly navigating this whole situation as best she can. Morino’s art is very pleasant with comfortable page layouts and easily distinguished characters. Hotaru’s family is also a nice change from what we often see in manga – they’re clearly highly functional and fairly close, and it’s easy to see how Hotaru turned out the way she did. Interestingly, there is an attempt to do the same for Hananoi, who comes from a much more manga-typical situation with absent parents and a distinct lack of love and affection in his life. If Morino delves more into this instead of just sort of throwing it into the story as a band-aid to explain his issues it could help save things – Jun Yuzuki managed to do so in The Prince’s Black Poison, and that romantic interest is similarly horrible for the first half of the series.

So there may be some hope here. Based on solely this volume, however, this reads like a terrible warning about toxic relationships rather than the sweet love story it’s advertised as. If you are a fan of what are sometimes referred to as “old school” romances (and that’s perfectly fine!), this may be up your alley, but if that’s not what you look for in a love story, this probably isn’t the book for you.