***This story originally appeared in the November ‘19 issue of Animation Magazine (No. 294)***

It’s been over 81 years since cartoonist Charles Addams introduced his wildly original clan of misfits in the pages of The New Yorker. Throughout the years, audiences around the world have fallen in love with the macabre antics of The Addams Family and enjoyed various incarnations of Morticia, Gomez, Wednesday, Pugsley and the rest of the tribe in the famous TV series, several live-action movies, two animated series and even a Broadway musical.

This month, we are treated to a new CG-animated version of The Addams Family, directed by animation veterans Conrad Vernon (Shrek 2, Monsters vs. Aliens, Madagascar 3, Sausage Party) and Greg Tiernan (Thomas & Friends, Sausage Party), and produced by Metro-Goldwyn-Mayer and Cinesite Studios. The creative team behind the film has taken great care to be faithful to Addams’ original vision, which turned the family comic on its head and offered a smart satire of a “normal” American suburban household. 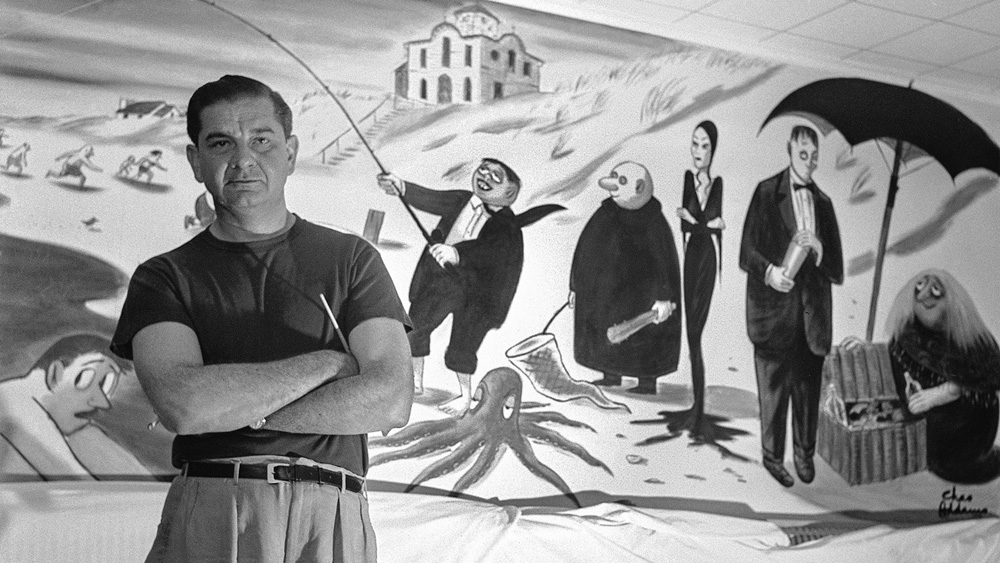 Charles Addams with one of his original cartoons.

Vernon, who was developing various projects after his 2016 feature Sausage Party when he was approached by MGM to work on the property, says he was initially hesitant to embark on the movie. “I was a huge fan of the TV show when I was growing up,” he notes. “But there had been so many different versions of The Addams Family, I really wanted to do something that hadn’t been done before. As we went back to the old print comics, we came across some that were about Morticia before she met Gomez, and she was dating different men. So, our writer Matt Lieberman (The Christmas Chronicles) and I thought it would be interesting to start the movie by offering a quick look at how Morticia and Gomez met and got married.”

The movie finds the eccentric, frightful family clashing with a duplicitous home makeover TV hostess (voiced by Allison Janney), who is plotting to get rid of them. Echoing Addams’ subversive style, the movie explores the very contemporary theme of acceptance of “the other” and the importance of embracing diversity in all its forms. Charlize Theron and Oscar Isaac lead the voice cast as Morticia and Gomez, with Chloe Grace Moretz as Wednesday, Finn Wolfhard as Pugsley, Nick Kroll as Uncle Fester, Bette Midler as Grandmama, and Snoop Dogg as Cousin Itt.

Making the Addamses an immigrant family provided the filmmakers with the opportunity to comment on some timely issues and include some important themes as well. “We thought it tied in very well with what is going on in America today,” notes Vernon. “That gave us a good reason to tell the story right now. It let us explore the fact that despite their differences, this family deserves to have their home and realize their dreams just like everyone else in their new town.”

Tiernan says he also fell in love with The Addams Family as a young boy, since growing up in the U.K., the show was constantly playing in reruns. “I am super proud of the emotional beats of the story, which tells the story about a family of outsiders,” he notes. “In this day and age, unfortunately there are those who promote the distrust of people of different nationalities, ethnic backgrounds and sexual preferences. We think our movie offers the perfect opportunity to make a stand against discrimination. The Addamses are not trusted in this new neighborhood because they’re different. We wanted to make the point that no matter how weird and different people are on the outside, we are all basically the same inside.” 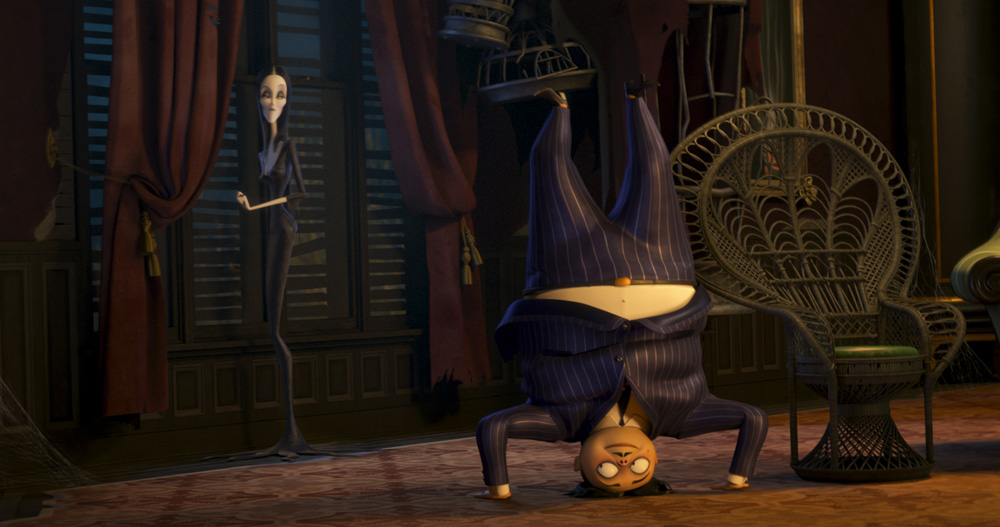 To flesh out the visuals of the movie, Vernon brought on one of his favorite character designers, former CalArts schoolmate Craig Kellman, who had also worked with him on Madagascar 3, Monsters vs. Aliens and Sausage Party. “When Conrad told me about the project, I thought it would be so much fun to go back to the original Charles Addams comics and use his remarkable drawings as a springboard,” Kellman notes. “The goal was to take his shape language and make it more exaggerated and exciting. He had so much great iconography, so it’s really fun to push and pull it and see how we could really translate it to CG animation.”

“We wanted to make sure the movie wouldn’t be derivative of anything but Addams’ cartoons,” says Vernon. “Once the story came together, and we saw this cohesive piece, I knew that we were on the right path and we could do something that was unique in its own way. When I was a kid, I loved that the fact that the show made me squirm a little bit inside. They were like this car accident from which you couldn’t turn away. You really fell in love with these characters, and they have a wonderfully creepy class to them.”

Going Back to the Addams’ Bible

One of the most valuable resources for Vernon and his team was a book by Kevin Miserocchi (director of the Tee and Charles Addams Foundation) called The Addams Family: An Evilution, which included character descriptions by the cartoonist himself. “He had written a paragraph on each one of the characters when the first TV show was being developed. That was everything we needed. I sent all of those descriptions to Craig Kellman, and we instantly knew who these characters were.” 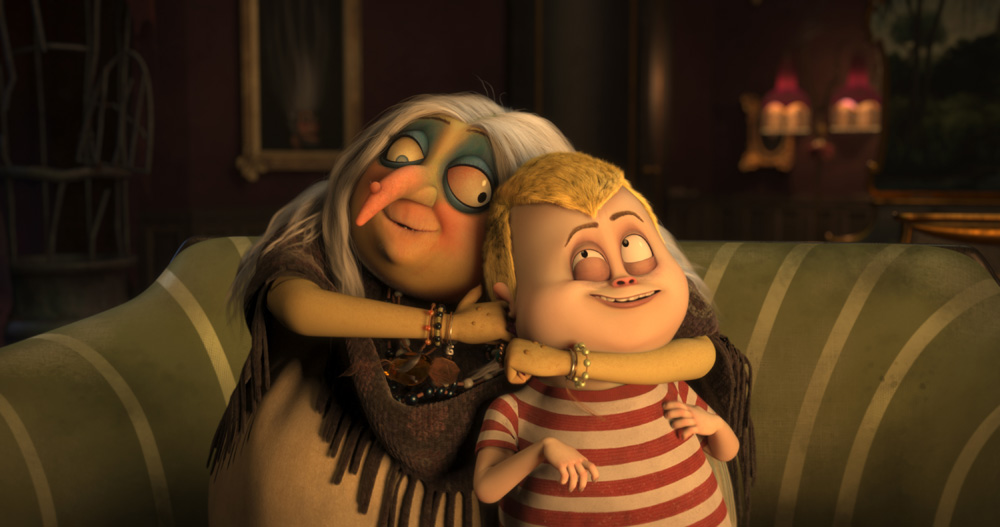 Vernon and Tiernan’s previous movie collaboration, Sausage Party, was produced by Tiernan’s animation studio Nitrogen, which was then acquired by VFX house Cinesite in 2017. “What was nice about this plan was that since Greg didn’t have to run his studio anymore, he could just be the co-director with me,” says Vernon. “We used most of the same crew that worked on Sausage Party and hired some new people, about 100 people at Cinesite and about 11 people at our satellite studio in Burbank. We just dove in and started production in the fall of 2017. This is possibly one of the fastest animated movies ever made, and I don’t recommend anyone else doing it!” he says with a smile.

The directors mention that they’re very pleased with the striking visuals and dark, saturated colors of the movie. “We were very happy that the look of the movie was left to us 100 percent,” says Vernon. “These days, there is a real aversion in the industry to do anything that may look too dark or gloomy. Well, we weren’t going to put Easter egg colors in this movie. That would have been a recipe for disaster.” 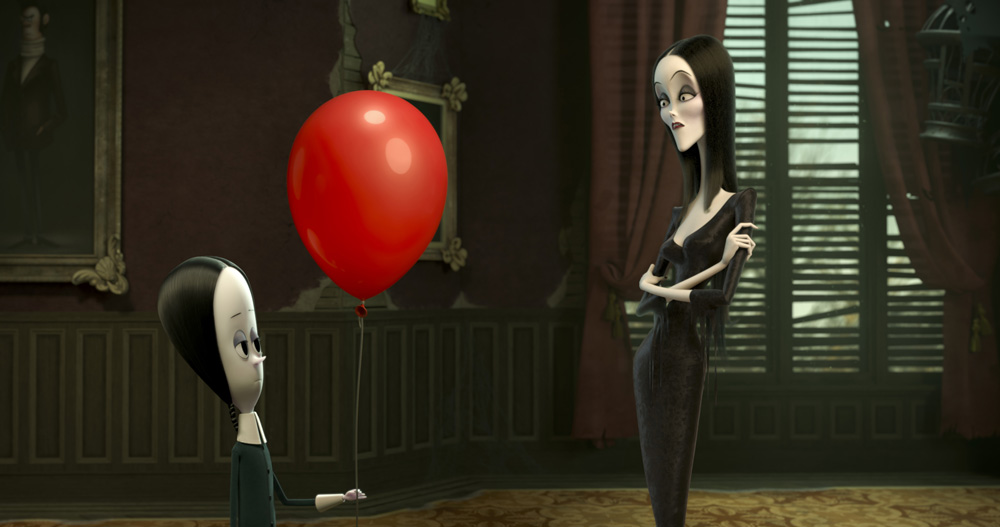 Production designer Patricia Atchison was another invaluable addition to the team. “Like everyone else who worked on the project, Patricia really loves the Addams Family. She did a couple of incredible spec paintings where she repainted two original cartoons without the characters to give us an idea of the overall production design.”

Atchison’s paintings captured the spirit of Addams’ original drawings beautifully, and they provided the team with the perfect guideline for the look of the movie. “We knew she had simply nailed it,” recalls Vernon. “We wanted the whole movie to look like her paintings, which where a hyper-realistic version of the comics. Of course, because it was painted, it looked animated, but we didn’t try to skew it or cartoonize the look. We left everything pretty straightforward and came up with this term ‘dilapidated elegance.’ That became our guide every step of the way.” 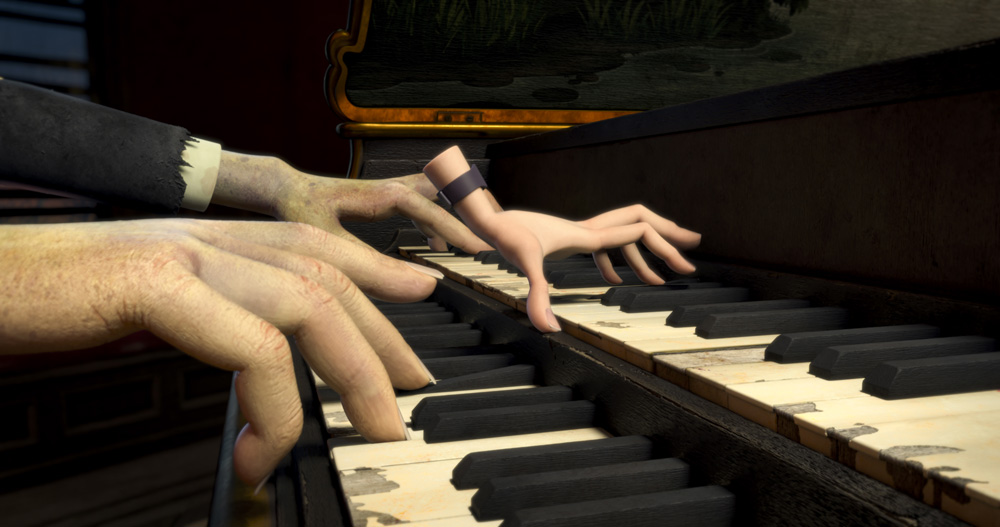 Vernon believes what makes the Addams’ lifestyle so fascinating to us is how they enjoy the macabre with seamless sophistication and class. “With them, it’s never about gross humor,” he notes. “They are just weird and creepy, kooky, mysterious and spooky — like the TV theme song says. They are an elegant, sophisticated family that loves each other, because they are the only people like them that they know. Patricia was finding that delicate line — it wasn’t just Grey Gardens with mice running everywhere. They have very elegant dinners… it just happens that they are serving a Jell-O mold with a sea cucumber in it. It’s nothing we’d ever eat, but it sure looks lovely. And they like spiderwebs, only they have to be in the right place and hanging properly!”

The movie’s head of story Todd Demong says the team also found inspiration in classic movies such as Mel Brooks’ Young Frankenstein. “We all love the classic Mel Brooks movie, and I think it helped us get the right comedic language for our movie. One of the hardest things about the Addams Family is that when you think of them, you might think Halloween, or zombies, or the occult. But the Addamses never do any of that. They’re just spooky and weird. They don’t summon the dead or use witchcraft. You get hints that they enjoy the darker side of things, but you ever see them walk with a zombie or call upon the powers of the underworld!” 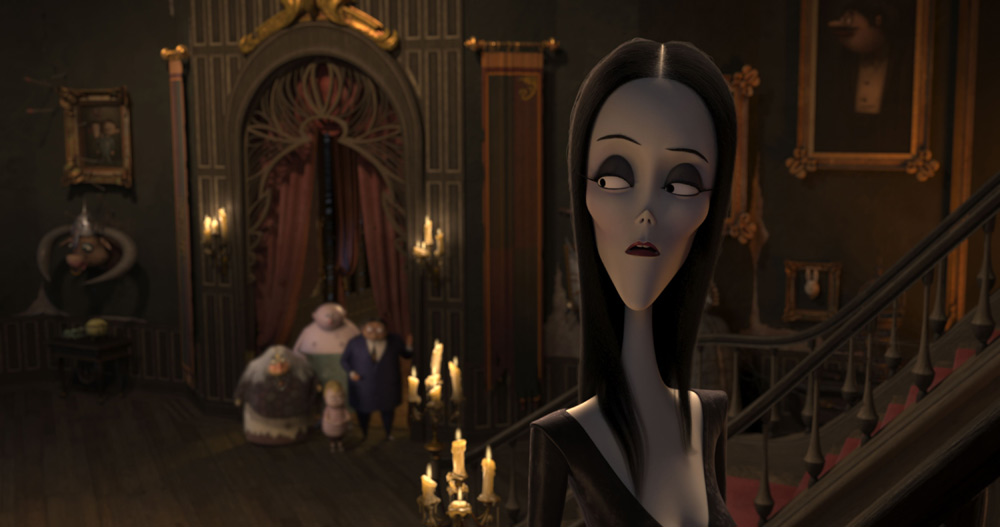 Demong adds perhaps that’s why the characters lend themselves so well to animation. “Animation allows you to do things with the family physically that would be a lot more complicated in live action,” he explains. “Their expressions and shapes look so perfect because they echo the original illustrations by Addams.”

Now that the movie is finally ready to hit the screens, the directors can’t wait for a new generation to discover these timeless characters. “We were surprised to discover that a lot of people under 20 have no idea who these characters are,” says Vernon. “Our hope is that young people will watch our movie and that will spark their interest to go back to the other live-action movies and the classic TV show and read the original comics by Addams.” 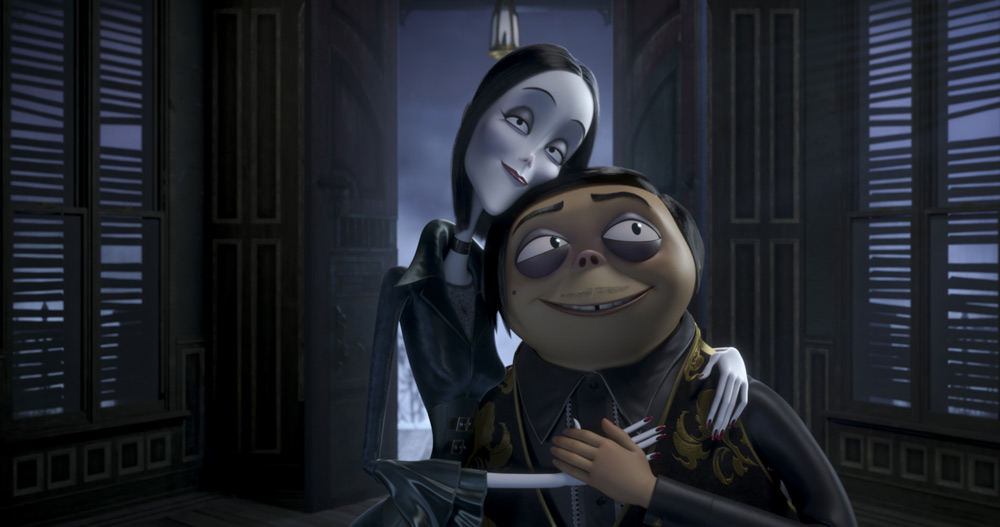