Animation enthusiasts have been talking about Genndy Tartakovsky’s stunning new series Primal for months. The show, which is presented as a special five-night event on Adult Swim this month, charts the adventures of a prehistoric man with his unlikely friend, an almost-extinct dinosaur. The show is created and exec produced by Tartakvosky (Dexter’s Laboratory, Samurai Jack, Hotel Transylvania movies), with art direction from his frequent collaborator Scott Wills (The Ren & Stimpy Show) and music by Tyler Bates (Guardians of the Galaxy, Samurai Jack).

Beyond the usual striking visuals and interesting subject matter which we have come to associate with Tartakovsky through the past few decades, what makes this series even more unique is that it relies only on music and images to tell its stories. We were very excited to chat with the animation master this month to find out more about his intriguing new show.

So, the past few years have been quite a productive period for you. You went from working on several Hotel Transylvania features for Sony Pictures Animation to a hugely successful reboot of Samurai Jack. We know you’ve got more things brewing at Sony, but can you tell us how the idea for this non-verbal prehistoric adventure came about?

Genndy Tartakovksy: It started out originally as more of a kids’ show about a boy riding a dinosaur, and then slowly, as I developed it over the years, it started to take shape as something more mature. Then, after the success of the final season of Samurai Jack for Adult Swim, it really solidified as a more adult, mature take on this primitive man and caveman relationship.

What were some of the visual influences for the show?

They were mostly 1970s sci fi art. Frank Frazetta, Moebius and Robert E. Howard’s Conan were the main influences. We wanted to make something raw, organic, brutal and visceral.

A retro sci-fi illustration type of aesthetic combined with our love of Frazetta, Bambi, Wizards and horror comics. 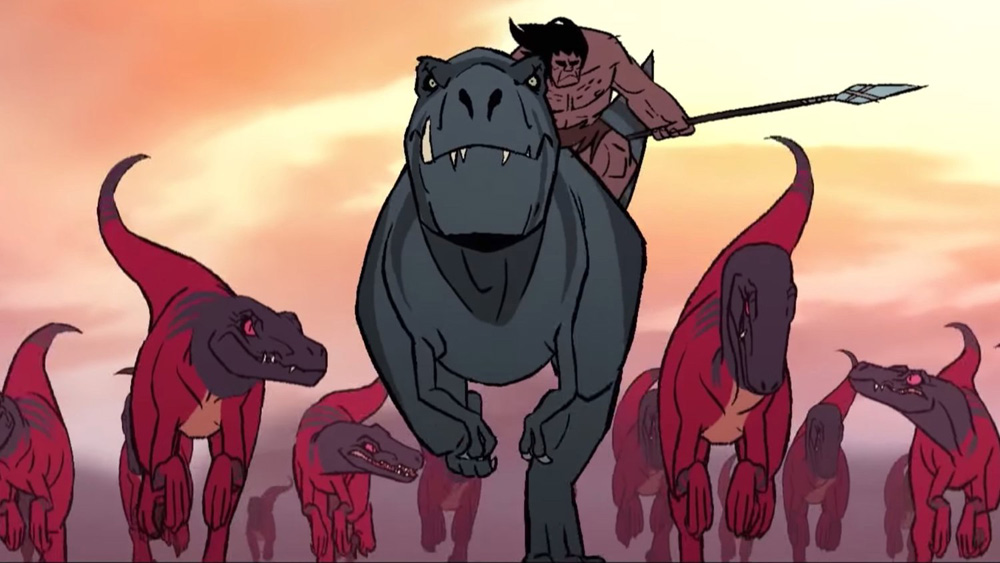 How long did it take from idea to delivery?

That’s always a hard question to answer, as the development process is very slow. Generally, I started messing with the idea in 2011, but then there would be years when I did nothing on it. I generally just draw and write notes whenever things would come into my head. That’s the best way I can answer this question.

Where is the animation produced and which tools are used to produce it?

The animation is produced here in Los Angeles and in Paris, France at Studio La Cachette. We use TVPaint, Photoshop and Animation Frameworks eXtension.

How did it feel to go back to the world of TV animation after working on so many Sony movies?

Well, it’s something that I have been really enjoying. We first did it with the final season of Samurai Jack, when I just finished Hotel Transylvania 2 and then came to Cartoon Network to do Jack. It’s a great change of pace, as well, as working with 2D animation is always amazing.

How many people work on Primal?

We have about 40 or so overall in Los Angeles and Paris.

What is the biggest challenge of producing this series?

I think just drawing-wise it’s the most challenging because there are real animals (dinosaurs) and humans, so there’s a level of draftsmanship and realistic anatomy that we wanted. But, then at the same time, we wanted to push the style and posing to be unique and comic book-y. Then, of course, there is no dialogue in the show, so you come across some storytelling challenges. We actually tell some pretty complex stories, so to do that clearly without dialogue can be sometimes difficult.

I mostly enjoy the freedom to do things that aren’t so black and white, so we can leave some things for the audience to figure out for themselves. We are clear on what we are trying to say, but then we can leave just enough for interpretation. Also, since this is an action show, there are no real boundaries for violence and brutality. Even though I am not a fan of gore, the show is set in the primordial world, and it’s very grisly out there.

What is your take on the animation scene in 2019? Is there such a thing as too much content?

No, I think it’s just about quality and uniqueness. It’s nice because there’s something for everyone, but the great shows always find their own place and audience. Of course, it will be more difficult to stand out, for sure.

Finally, can you offer some advice for those who want to find animation jobs today?

Be diverse in your drawing style and ability. Have passion and love for what you want to do, and work your ass off!