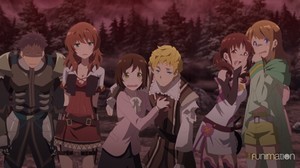 I was genuinely hopeful for this episode of Arifureta. Hajime had joined up with his old teacher and classmates to go on a field trip, and while the students still seemed semi-anonymous, he’d at least built up a decent rapport with Aiko-Sensei already. Perhaps the other kids were just waiting in the wings on character development. Plus the proposed plot presented itself as promising on paper: Hajime’s already conquered several dungeons, so taking on a dragon was the next logical step. As usual, the show had all the ingredients for a solid fantasy romp. And as usual, it combined those ingredients into the most underwhelming recipe possible.

I’ll start by admitting that it’s not all bad. There are parts, especially at the beginning of the episode, where it actually looks pretty good by Arifureta standards. The setting and direction make good use of shifting color palettes, from a nice outdoorsy theme in the daylight switching to heavy, red-hued night tones once the dragon shows up and things get tense. And there’s some solid ramping up of interest leading to the discovery of that dragon. Its existence is given away right there in the episode’s title and if you’ve been paying attention to the show’s opening theme you can probably further guess its true identity, but the dramatic tension is still there, it still keeps you just interested enough.

That demonstration that the anime can have a clue what it’s doing sometimes carries over to another new character introduced this week: Will, the Count’s son that Hajime was tasked with finding last episode. He doesn’t have much going on himself, character-wise, beyond grappling with his survivor’s guilt in the wake of the dragon attack, but that’s there to facilitate Hajime imparting some of his philosophical life advice. I’ve found that as abrasive as the narrative insists on making him, getting inside Hajime’s head and seeing how his time surviving solo in the labyrinth affected his personality has actually been decently interesting. And here we get to see him making the point, well-worn for him, that survival is something you should be grateful for, regardless of the circumstances. For as nihilistic as this series seemed to start out, I find I’m quite down with the message that just continuing to live is a great thing to let yourself do. That’s uplifting, and lord knows I needed that kind of encouragement for the rest of this episode.

It shouldn’t be too much to ask a series like this for a cool monster fight, but problems predictably pop up as soon as the dragon does. The CGI is as dreadful as ever, though we expect that from Arifureta by this point. The same goes for the slapped-on magical attack effects, though one of those at least was a moment so janky it provided the biggest laugh I’d gotten from the show in weeks. And this fight part isn’t even all bad; There’s actually a pretty cool moment from Shea, of all people, when she subverts her previous dispatch into a river for a surprise attack that’s pretty cleverly-choreographed. Plus Sensei being the one to carry around and protect Will is a cute detail. But it’s still overall a hasty Arifureta fight scene, this time cluttered up with extra classmate characters we still don’t know.

That’s another problem with the overall structure of this episode. When he met up with them last episode, I foolishly figured Hajime would spend some time reconnecting with these old classmates and giving us some insight into their personalities. But thus far there’s nothing doing on that front. They still aren’t even named here, and they spend all their time in the background with the camera panning quickly over generic reactions to all the other stuff that happens this episode. They’re superficial tagalongs complimenting the idea that Hajime is back together with some of his previous school-chums, but they contribute so little to the overall course of things that anytime they appear I just found myself wondering why four of them needed to come along.

But as superfluous as those kids are, they’re nothing compared to the post-battle third of this episode being devoted to dragon sodomy. I am not kidding on this: Hajime cites an apparent parable about draconic weak points before we get a gratuitous close-up of the animal’s anus and a massive metal pike being driven into it, at which point the plot twist that this is a girl dragon manifests itself. We then spend the rest of the episode on reptilian rectal agony as Hajime tortures her tush for information. Now look, I’m no prude. I can enjoy bawdy humor. How NOT to Summon a Demon Lord was an isekai that shamelessly went all sorts of saucy places and I ended up loving that show. But Arifureta simply doesn’t have the chops to make this part work, especially with as long as it carries on for. It’s an overly extended singular joke about a lady having something jammed up her butt, weighed down by those herky-jerky dragon animations. There’s actually some important story information imparted here, finding out the dragon lady was mind-controlled by a bigger baddie that may prove the be an overarching threat for the rest of the show, and it’s impossible to digest in a dramatic way because we keep rounding back to this ridiculous rump romp. There was probably a way to make this part funny, but this wasn’t it.

Anyway, after all that the dragon transforms into the last pretty lady from the OP needing to be introduced, a dragonborn named Tio, and Hajime literally drags her off as the episode ends. I’m already pretty put off by the character, from her intro encompassing everything that didn’t work about this episode to her characterization and performance embodying a very particular ‘lewd masochist’ type that’s already getting old. It’s unfortunate that this all torpedoed my opinion of this episode of Arifureta the way it did, because as usual, there was potential there for a few minutes, at least.

Arifureta – From Commonplace to World’s Strongest is currently streaming on Funimation and Hulu.