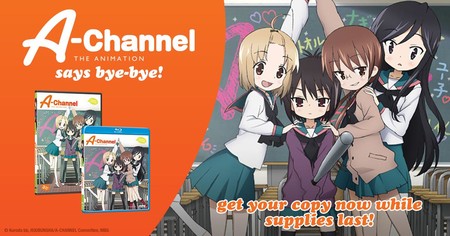 Sentai Filmworks is listing that its home video release of the A-Channel anime series will go out of print as of April 30, or as long as supplies last. The company’s site is currently selling the Blu-ray Disc for US$11.99 and the DVD for US$9.99.

The company released the series on DVD in 2012, and then on Blu-ray Disc in 2015. Sentai Filmworks describes the story:

Toru and Run have been best friends forever, so when Toru learns that she’s managed to get into the same high school as Run, she runs to tell her… only to find Run in a compromising position with yet another girl, Yuko. Needless to say, that makes things a bit awkward at school, with Toru fending off those who might be interested in Run while Yuko and their other girlfriend, Nagi, have to deal with Run’s own penchant for drama. But it’s not all angst all the time, and as the school year progresses the four girls and their many classmates find time to laugh, play and figure out how to handle the unexpected problems life likes to throw at them. Like bugs in the house, accidentally giving each other horrible haircuts, freezing up at karaoke or forgetting to put your underwear on in the morning. When it comes to learning about the real world, there’s always something ‘educational’ to be found in A-CHANNEL: The Complete Collection.

The 12-episode series based on bb Kuroda‘s manga premiered in April 2011.