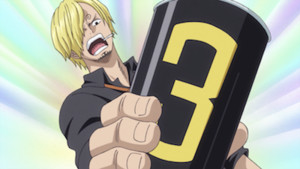 With Whole Cake Island behind us, it’s time to gear up for a new story arc. The Straw Hats’ next destination is the samurai country of Wano, where Zoro and the rest of the crew are waiting for us, but before we get there we’ll be jumping around the rest of the world and catching up on what we’ve missed since slinking into Big Mom’s domain. Normally at the end of an arc, we’d get all these big-picture info dumps while the Straw Hats celebrate a well-fought battle on whichever island they just saved, but we didn’t earn a party this time around, and the upcoming story developments are significant enough to warrant their own mini-arc in the form of the Reverie.

The Reverie is a political convention held every four years, where established government figures and monarchs all come together to discuss world events. This is an event that’s been talked up in the series for quite a while, and a multitude of important characters have notable agendas, like how Fujitora wants to propose the abolishment of the Seven Warlords program, and the people of Fishman Island want to formally join the World Government so they don’t have to align with pirates like Big Mom for protection. Many long-term story threads will come to a head here, and disaster is low-key inevitable.

But that stuff is just barely getting started this week, and the main bulk of this episode still focuses on the Straw Hats. At least half of this episode is filler in the form of a re-animated Luffy/Shanks flashback, and I could probably recite this story from memory at this point, so I’m the last person who needs a refresher. I’d say this is an especially unremarkable take on this flashback too—it looks like the Episode of East Blue TV special where they use more modern character designs, but it isn’t nearly as well-directed or animated—it’s simply here to kill time. I guess they have to make room for filler somewhere to keep themselves from overlapping with the manga, so these transition episodes are the sacrificial lambs.

Back in the present, news has spread about the crew’s exploits in Totto Land, and it seems Morgans has written a massive puff-piece all about Luffy. The most exciting surprise is that the paper dubs him the new “Fifth Emperor,” putting him in the same league as Shanks, Big Mom, Kaido, and Blackbeard. Whether this qualifies him as an official Emperor or not is up for debate (Sakazuki of the Navy rejects the announcement) but no individual person gets to decide who is and isn’t an Emperor, since it’s a matter of world power and reputation more than anything. According to the paper, Luffy’s a mastermind who deliberately blew up Big Mom’s tower, led groups like the Sun pirates, Firetank pirates, and Germa 66 to victory, and singlehandedly defeated two of Big Mom’s strongest officers—Cracker and Katakuri. The paper also acknowledges the Grand Fleet that pledged allegiance to Luffy at the end of Dressrosa, so as far as the world is concerned, Luffy is a super-powerful genius who commands an army of 5,000 men and fears absolutely nothing.

Luffy and Sanji are both getting bounty upgrades as a result of this adventure, though sadly Luffy’s new number is being held until next week. Sanji is now a man of 330 million berries, so for a brief moment his wanted level is slightly higher than Zoro’s. But that doesn’t mean everything is going right for Mr. Swirly Brow! Earlier in the episode, Luffy discovered a mysterious can in his pocket, and it turns out one of Sanji’s brothers snuck in a Germa 66 transformation raid suit as a “gift” to Sanji. Sanji’s annoyed by this and tries to throw the can overboard, but Luffy and Chopper are eager to see him transform into a Power Ranger and shoot laser beams. This surprise also comes around the same time that Sanji realizes the name on his wanted poster has been changed to “Vinsmoke Sanji,” even after he went through all that trouble to properly disown his family. Life’s just punking him at this point.

I feel like in another story Sanji would have disowned his family and that would have been considered closure, but here it’s almost the opposite. Sanji got to re-establish his separation from the Vinsmokes, but in the process of dealing with them, their fingerprints are more visible on his life than ever. Sanji hasn’t used the raid suit yet, but you know there’s got to be a scene in the future where he has to choose between being stubborn or using this new tool, even if he doesn’t like where it comes from. It’s too complicated of a situation for me to definitively say this is a good or a bad direction to take his character, though it would have been strange for the story to introduce the Vinsmokes just to tell them to screw off and make them disappear again. Sanji kept his relationship to them secret for a very long time, and now the luxury of that secret is gone.

It’s a shame that the anime is holding on to the exact size of Luffy’s new bounty at this time, since it goes hand-in-hand so well with the Fifth Emperor reveal. This is a fairly weak episode all things considered, but I really like the compromises being made in upgrading the Straw Hats post-Whole Cake Island. It’s a nice payoff to what was already a spiritual victory at best. I love the contrast between the chaotic mess that was the Big Mom assassination plot, and the perfectly executed middle-finger that the rest of the world assumed. It takes guts to fail upward this hard, and Luffy’s a man of guts if nothing else. Nami is also getting a power upgrade in the form of Zeus, the right-hand-cloud who was seduced away from Big Mom. It’s not clear how Zeus can operate independently of his original master, since he was given life by Big Mom’s own soul, but I like that Nami now has a super-powerful (but still kind of dopey and cute) ability that’s also technically its own character.

One Piece is currently streaming on Crunchyroll and Funimation.com.